Pianist Jorge Federico Osorio’s performance of Beethoven’s Piano Concerto No.1 in C Major fit Saturday’s (June17) Mainly Mozart Festival theme “Revolutionary Reactions” to a T. Revolutionary zeal spurred his exuberant runs and bright, arresting articulation without neglecting the concerto’s essentially classical structure, which he elegantly outlined at every turn. And in the context of Osiorio’s stellar keyboard technique, elegance is not meant in the sense of the elaborate lace cuffs sported by Elizabethan gentlemen, but the impressive simplicity of rows of Doric columns favored by classical Greek architecture. 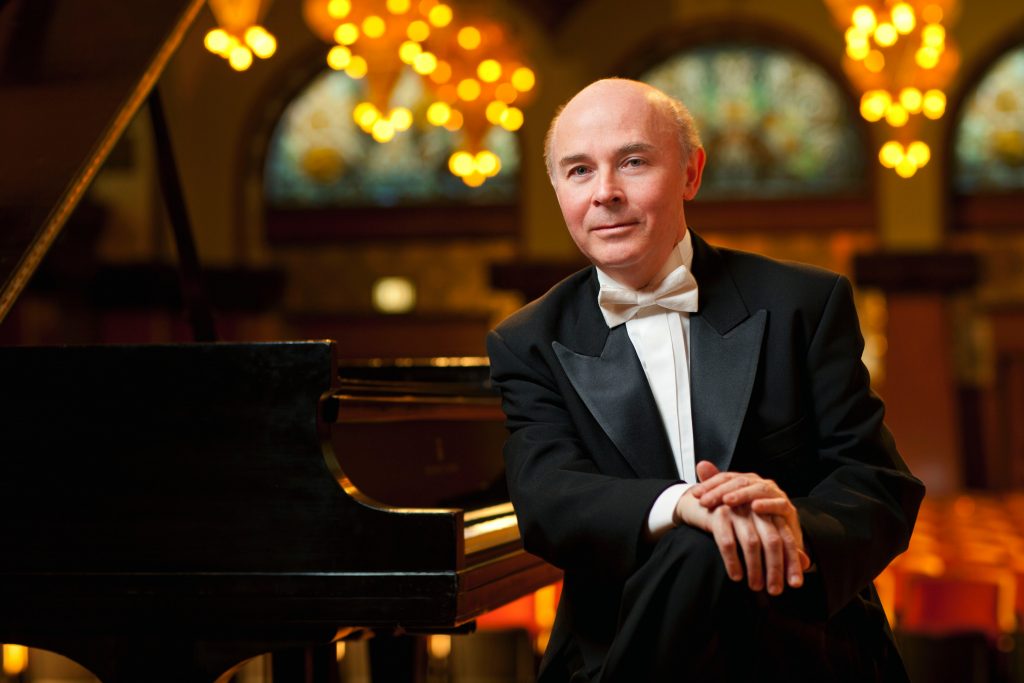 In this Piano Concerto No. 1, actually Beethoven’s third attempt at the genre, the composer gives the pianist more commanding musical vocabulary than either Mozart or Haydn created, and he ventures into bolder harmonic territory than his mentors dared. Music Director Michael Francis cultivated a more muscular sound from the Festival Orchestra, collaborating sympathetically with Osorio’s bold approach and choosing swift tempos that a young, brash composer would likely relish. Who could resist the vigor of Francis’s rousing Rondo finale, as soloist and full orchestra competed for creating the more vibrant incarnation of Beethoven’s jocular rondo theme? Osorio’s flashy yet immaculate cross-hand figurations won my vote, but it was a photo finish to be sure.

Back in the salad days of classical music radio, airing Sergei Prokofiev’s Symphony No. 1 (“Classical”) was a ubiquitous as commercials for luxury automobiles. And for good reason. To the novice listener, Prokofiev’s playful themes proved instantly charming, and to the seasoned listener, the reward was discovering the wit with which the composer tweaked the structure and conventions of the symphony as Haydn and Mozart knew it. The plenitude of the symphony’s exposed solos suited both the temperament and technical prowess of the Mainly Mozart Festival orchestra, and the result was the eagerly anticipated surfeit of riches.

To cite but a single example, in the first movement, Prokofiev gives an extended solo of an Alberti bass line—one of the most banal accompaniment figures in classical music—to the bassoon, decorating the improbable solo with a barely audible, fanciful “fireflies in the forest” accompaniment from the violins. Principal Bassoon Whitney Crockett added that touch of dreamy ardor to his big solo, as if he were playing one of the favorite themes from Camille Saint-Saëns’ “Carnival of the Animals.” Sweet and wry at the same time.

Similar to his approach to the Beethoven Piano Concerto, Francis chose a dangerously fast tempo for the Finale—yes, it is marked Molto vivace—and the orchestra took up the challenge with evident glee and predictable success.

In this concert, Mozart took a back seat to Beethoven and Prokofiev, but that is not necessarily a bad thing. Francis opened with four short Mozart Contradances, party music from the 18th century. Five strings and six winds stood in two rows at the edge of the Balboa Theatre stage and gave these playful, good-humored dances a spirited romp.

A four movement unnumbered symphony, Symphony in D Major, K. 204, which the 19-year-old Mozart himself extracted from his longer Serenade in D Major, also K. 204, featured a slow movement that is actually a modest violin concerto, gracefully played by Concertmaster William Preucil. That same movement opened with an attractive flute solo played by Principal Flute Jeffrey Khaner, and the other first-chair wind players had moments of glory in the  Andantino Grazioso, but taken as a whole, this symphony did not have a lot to say.

This concert was presented on Saturday, June 17, 2017, by the Mainly Mozart Festival at the Balboa Theatre, 868 Fourth Avenue, San Diego, The festival continues through June 24, 2017.