I have a confession to make: I really, really, really dislike anything in the horror genre. I have been sickened by the sight of gore, and I hate moments when something shocks by jumping out suddenly (I’m looking at you, Wait Until Dark). Most of my experiences with horror have been films, however. It’s rare that a play focusing on horror is produced, at least here in San Diego.

That said, I admired the skill and technical ability it took to produce Witchland, the Backyard Renaissance production currently “haunting” the Tenth Avenue Arts Center until December 11.

Given where I’m coming from, admiration is as close to a rave as you’re going to get. And I’m not kidding: I truly admired what it took to produce a play about a haunted town. 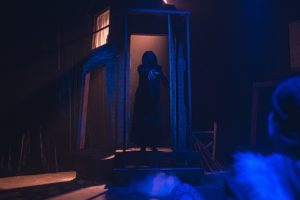 It’s a real town, Richland, Washington, home to the Hanford nuclear site, which, in its World War II heyday, produced plutonium for the Manhattan Project’s research on creating an atomic bomb. Even though it was decommissioned in the 1980s, cleanup continues and will continue. Those of us who drive past the San Onofre power plant on Interstate 5 are familiar with long-term cleanups. In the Washington State case, no wonder stories about hauntings and supernatural creatures have circulated for years.

Playwright Tim Mulligan was raised in Richland, and he IS a big fan of the horror genre. He knows the ins and outs of what’s required, including timing the shocks appropriately to keep the audience engaged. The script, interestingly enough, is scarier than it plays on stage. I can see why the Backyard Renaissance was drawn to it.

It also takes a lot of performers to put it on, even though the principal cast is small. Many hands are needed to create the scares, which were designed by Fright Coordinator and Haunt Specialist Jeffrey Neitzel. 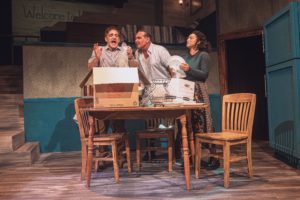 The story focuses on a gay couple, Van (Daren Scott) and Jared (Christopher Louie Szabo), who move to Richland from Seattle with their daughter, Ali (Amira Temple) when Jared gets a job on the Hanford cleanup project. It turns out that they move into a house that is close to one occupied by the Witch (Dagmar Krause Fields), who makes a tent of twigs that seem to have magical powers. You don’t mess with the twigs, but of course, Jared messes with them, touching off the Witch’s wrath, which is considerable.

Andrew Oswald’s direction not only helps keep things moving with precise traffic control but also keeps the focus where it belongs and off of where it doesn’t belong. Faith A. James, Zak Weinrich, Lillymoon Perez, and Jessica John have provided costumes ranging from casual clothes to radiation officer yellow suits. Tony Cucuzzella’s scenic design creates several playing areas on the smallish Tenth Avenue stage, plus he designed the sticks and other properties. Lorrena Harvey’s lighting design is effectively spooky. George Ye’s sound design is filled with special effects.

Mr. Scott, Mr. Szabo, and Ms. Temple anchor the play well, as their performances help the audience to care about what happens to their characters, which is the basis for effective scaring.

Oh, and there is seating for people who want to be scared and people who don’t. You can guess what section I sat in.

At this writing, there are only a few performances of Witchland remaining. If horror is your thing, I hope that you’ll take advantage of a fine example of this genre.

Remaining performances are Thursday, December 9, Friday, December 10, and Saturday, December 11, all at 8pm. Parking for the Tenth Avenue Arts Center is on the street or in nearby pay lots. Additional credited cast members are Kay Marian McNellen, Marcel Ferrin, Kate Rose Reynolds, Liliana Talwatte, Kaivan Mohsenzadeh, Markuz Rodriguez, and Dylan Napieralski, though I noticed at least one uncredited performer in costume. The run time is approximately 90 minutes with no intermission.