If the choice is between quantity and quality, I always opt for the latter. I prefer elegant, modest portions of food prepared by a skilled chef rather than a huge platter of food cranked out by some roadside hash house. 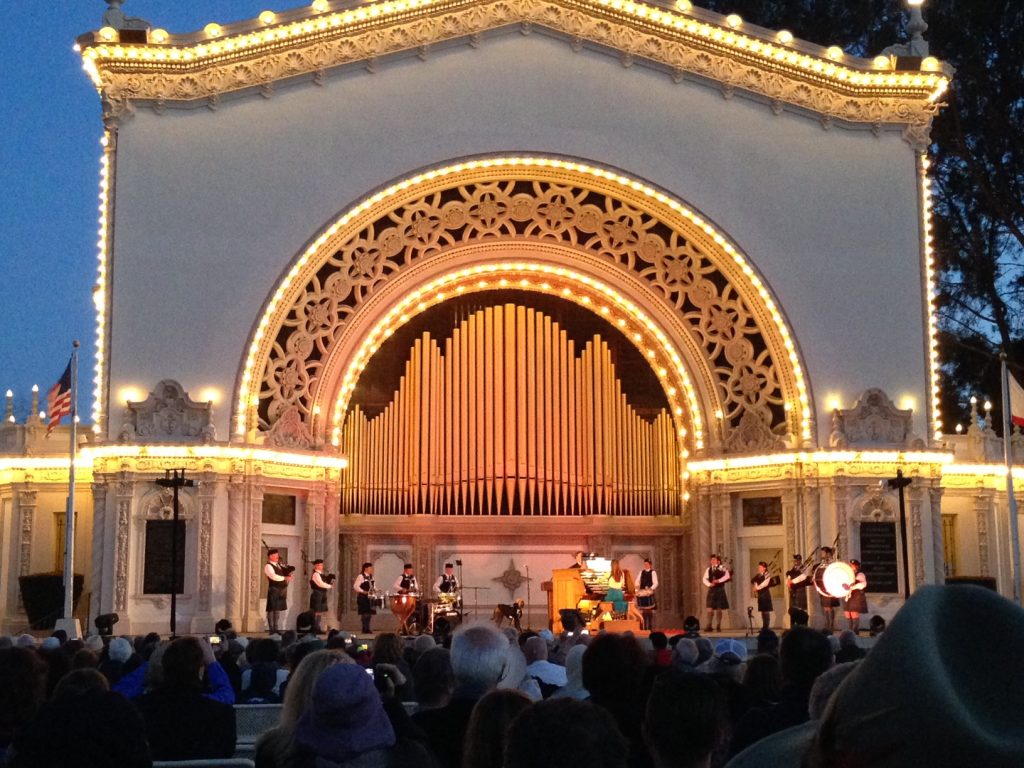 There is something to be said, however, for bragging rights: the tallest skyscraper, the highest batting average, and, back in the era of cheap gas, the car engine with the greatest horsepower. On Saturday (April 23) the Spreckels Organ Society’s concert with Civic Organist Carol Williams celebrated the addition of the four new ranks (i.e., rows of pipes of the same sound) that now allow Balboa Park’s treasured Spreckels Organ to rightfully claim the title of the world’s largest outdoor pipe organ.

If you are imagining that this field of competition for this distinction is not numerous, you are 100% correct. But the Spreckels Organ claim is valid nonetheless, and the instrument’s 80 ranks of 5,017 pipes places San Diego’s Spreckels Organ at the top of the list of outdoor organs in any record book.

After the expected and, I suppose, requiste speech-making about the historic nature of this achievement, Williams and the House of Scotland Pipe Band launched into the outrageously raucous and totally smashing “Highland Cathedral,” a kind of stately processional by Ulrich Roever and Michael Korb that united the sonic power of organ and assembled bagpipes. This ensemble piece and Williams’ dramatic account of Max Reger’s Introduction and Passacaglia in D Minor demonstrated the Spreckels Organ at its best—producing a rich, reedy wall of sound that overcomes all the competing sounds of the park as well as planes descending into Lindbergh Field.

Demonstrating the virtues of the new stops, each of which is rather slight in volume, proved less successful. Neither Civic Organist Emeritus Robert Plimpton’s meandering “Imperial March” by Edward Elgar nor Williams’ own recent composition “A La Romantique,” a slow cantabile ballad of sorts, made much of an impression where I was seated towards the rear of the pavilion, although they may have been very sweet heard from the organ console right in front of the pipes.

Percussionist Jason Ginter and Williams collaborated in a sweet jazz version of the 1933 romantic ballad “Moonglow,” but another collaboration struck me as strange. Stage actor Miles Anderson recited the story “Albert and the Lion” with a variety of sound effects and riffs supplied by Williams on the organ. In this purportedly amusing tale, a British couple takes their young son to an amusement park, where he is devoured by a lion. That is humorous?

Another guest musician on the program, the masterful theater organist Russ Peck, supplied a clever, sophisitcated accompaniment to the 1915 silent film “Fatty and Mabel at the San Diego Exposition,” starring the infamous Fatty Arbuckle and Mabel Normand in some loosely connected adventures at the Panama-California Exposition. Like many early films, the humor was largely physical, which meant every 30 seconds someone was either punched in the face or knocked over. What was humorous on the silver screen in 1915 does seem rather crude today.

Williams capped the very long program with a rousing transcription of Rossini’s entire Overture to the opera William Tell. After seven or eight minutes, the folks seated around me had just about given up hope that the Lone Ranger would appear, when the Centennial Tuba sounded the tune that every American of a certain age recognizes. At that point, Jason Ginter added just the right amount of snare drum assistance to bring the piece to its resounding climax.