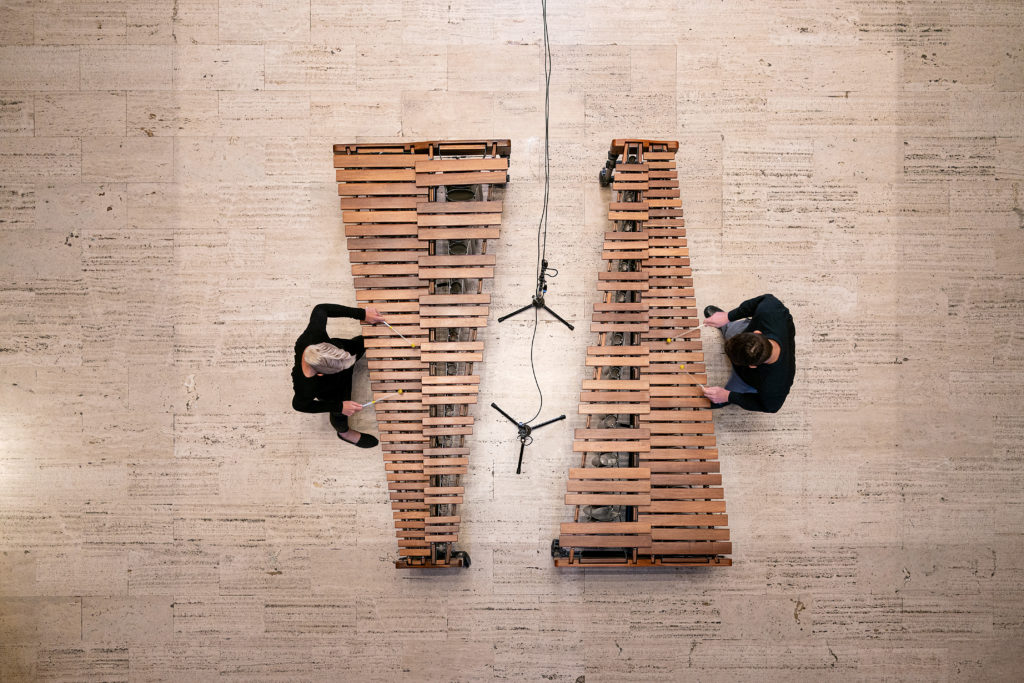 Not only does Art of Élan present its intriguing chamber music concerts at the San Diego Museum of Art; Artistic Director Kate Hatmaker also strives to correlate its programming with art in the museum’s collection. Tuesday’s online program, titled Reflections, took inspiration from a series of striking photos of twins by the late American photojournalist Mary Ellen Mark.

With startling congruence, the concert started with an overhead view of a pair of identical marimbas placed in parallel formation in the museum’s main atrium that echoed Mark’s photo of teenaged Lakeasha and Takeasha Edwards reproduced in the Art of Élan printed program. From opposite sides of the atrium entered percussionists Fiona Digney and Andy Watkins to execute with fleet, understated prowess Steve Reich’s 1996 “Nagoya Marimbas.” This spellbinding etude presents Reich at his most charming and sophisticated and set an uplifting tone for the entire concert.

Brazilian composer Marcos Balter’s “Pessoa” for two bass flutes provided an unusual twin performance. Rose Lombardo confidently navigated Balter’s stream of seemingly tentative abstract motifs that gradually gather momentum and focus to be joined by a second bass flute part that had been recorded earlier by Claire Chase. Soon the visible flute and the invisible flute engage in agitated competition, only to fade away to Lombardo’s delicate incantations. Although the bass flute is rarely heard in a solo role, Lombardo’s rich vibrato and gentle flutter-tonguing brought out its winning traits. The trio of “Pessoa” musicians represents a significant San Diego intersection: Lombardo is the San Diego Symphony’s Principal Flutist and regular Art of Elan musician; San Diego native Claire Chase has become one of New York City’s premier contemporary music performers, and Balter has been recently added to the UC San Diego’s music faculty. I predict we will be hearing much more of his music in the near future.

The music of Jacob Druckman, one of the giants of the American avant-garde of the last century, is always full of delightful surprises, and his 1986 “Reflections on the Nature of Water” is one of the classic modernist solos for marimba. James Beauton chose three movements of this work, and two of the movement titles—Profound and Restlessness—aptly describe the mood of Druckman’s work, which Beauton delivered with exquisite, highly detailed technical mastery. Given the title of Druckman’s piece, Hatmaker staged the performance in front of two of the museum’s gorgeous paintings—one of the busy Venetian lagoon and the second a wide river in a bucolic setting. We were invited to reflect on both the nature of water and water in nature.

Art of Élan embraces standard repertory with equal ardor as it relishes the new, so Anne-Marie Dicce-Valenzuela’s suave aria “Lascia ch’io pianga” from G. F. Handel’s early opera Rinaldo complemented the contemporary offerings that preceded it. Staged in the museum’s hall of imposing Spanish Baroque paintings, the soprano’s graceful arcs of Handel’s strains, the piquant murmur of from harpsichord’s progressions so expertly delivered by Ruben Valenzuela, and the comforting bass line of Alex Greenbaum’s cello amply conjured the flourish of 18th-century elegance–even as we relied on our 21st-century technology to access it.

Saving the most dramatic presentation for the concert’s climax, violinist Kate Hatmaker, standing alone in the center of the museum atrium, tore into Jessie Montgomery’s pulsing Rhapsody No. 1 for Violin . From the second floor, Disco Riot, dancers Zaquia Mahler Salinas, Lauren Christie, and Desire Cuizon, swooped down the museum’s grand stairway, creating a vibant legion of ecstatic dervishes that twirled to Montgomery’s vivid moto perpetuo figures.

This Art of Élan concert filmed at Balboa Park’s San Diego Museum of Art was streamed on November 10, 2020, and continues to be available for purchase at www.artofelan.org or www.SDMArt.org.