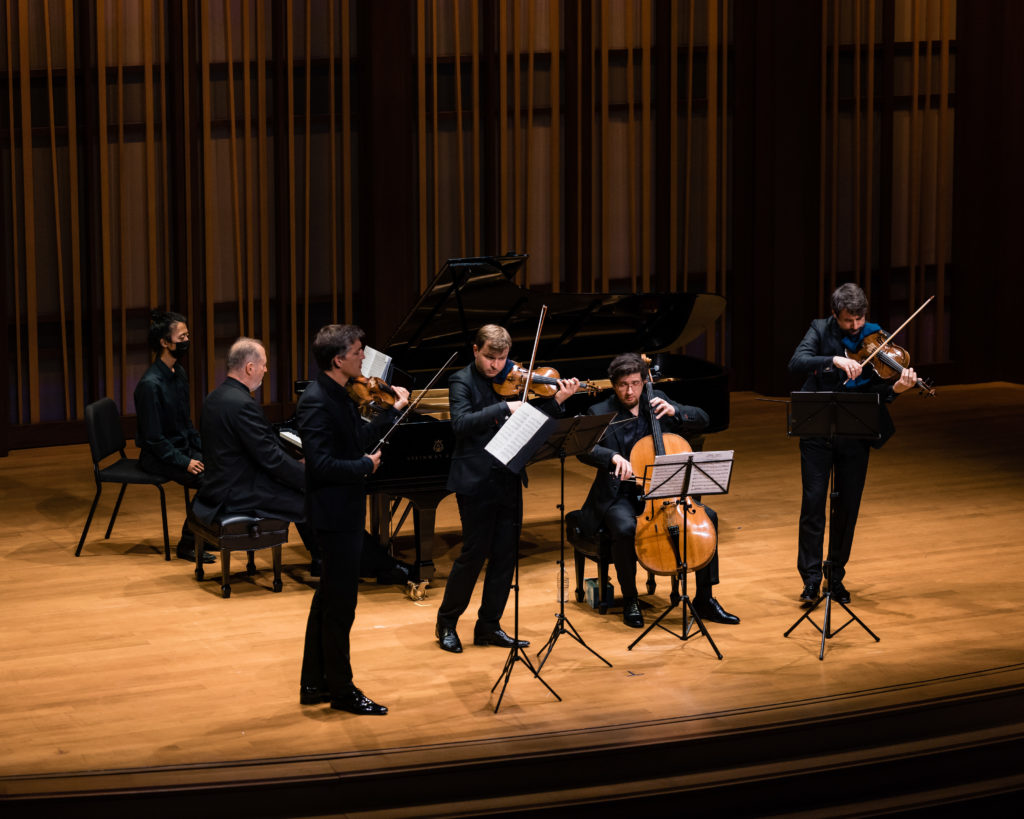 The La Jolla Music Society opened its 2022—2023 concert season Saturday combining a new ensemble to San Diego, the Apollon Musagète Quartet, with an old friend, pianist Garrick Ohlsson. In a telling, elegantly wrought performance of Dmitri Shostakovich’s Piano Quintet in G Minor, these musicians confirmed the wisdom of hiring an American pianist and a string quartet of Polish musicians to play this gem of Russian chamber music.

After the modernist style of Shostakovich’s 1936 grand opera Lady MacBeth of the Mtensk District brought condemnation from the Party’s music censors and Stalin himself editorialized against its deviation from Socialist Realism, Shostakovich decided to craft an inventive but decidedly less avant-garde chamber work—his Piano Quintet—to restore his standing with the Party. The sturdy five-movement Piano Quintet was awarded the Stalin Prize in 1940, for Shostakovich unambiguous vindication, but the quality of the work itself has always transcended the political overtones of the last century and kept it in the repertory.

Set in the dark key of G Minor, the work’s deep piano rumblings at the opening may suggest a mood of ponderous gravitas, but the composer is, I believe, foreshadowing the mysterious journeys of the two quiet movements yet to come. The Quintet’s first two movements form an expansive Prelude and Fugue, although the Fugue is not an academic exercise, but rather a focused spiritual meditation, on which the members of Apollon Musagète lavished their most burnished sonorities and sweetly focused ensemble playing. As the Fugue intensifies, Shostakovich subtly merges the two disparate musical movements of his time, Expressionism and neoclassicism, by coloring his fugal development with hints of dark, Expressionist foreboding. With immaculately balanced ensemble, the players players gave a most compelling account of this strange but wonderful music.

After such mystical speculation, it is not surprise that the center movement sounds like a rousing, jocular village festival, a playful burlesque that received the players’ most muscular conviction. The fourth movement turns out to be a slow aria, richly intoned by first violinist Paweł Zalejski, supported by cellist Piotr Skeweres’ gracefully executed pizzicato bass line and ornamented by delicate high-pitched piano figurations from Garrick Ohlsson.

The solo piano transitions into the animated finale, in which the piano finally takes the lead spinning out a vibrant dance in major mode. Zalejski, second violinist Barotsz Zachłod, and violist Piotr Szumiel took turns extending the dance motif. For such a broadly conceived piece, the Piano Quintet ends with unexpected calm, but then Shostakovich tended to avoid the predictable. The composer wrote the piano part of the Piano Quintet for himself, which he played at its premiere with the Beethoven Quartet. Unlike other piano quintets, it is not a showy part, but one that spends most of the time grounding the movements in well-crafted, propulsive bass lines. Ohlsson carried out the composer’s requirements with aptly understated strength and shrewd design.

Without explanation, Apollon Musagète Quartet substituted Franz Schubert’s String Quartet in B-flat Major, D. 36, for the scheduled Dvořák String Quartet in E-flat Major, Op. 51. A work that Schubert completed at age 14, the quartet is a congenial work full of bubbling, playful themes that Apollon Musagète played with consummate ease. It certainly filled the space on the program that the Dvořák was originally given, but in no way did it take the place of the Czech composer’s mature string quartet.

Apollon Musagète opened their program with three short movements from J S. Bach’s The Art of Fugue. While their approach was polished and clearly reverent, their unceasing legato and lack of thoughtful phrasing was mildly disturbing, a surprisingly old school approach to Baroque music. Who does this any more?

This program was presented by the La Jolla Music Society on Saturday, October 8, 2022, at the Conrad Prebys Performing Arts Center in downtown La Jolla.