Earlier this year, an exasperated President Donald Trump sounded his plaintive cry, “Where is my Roy Cohn?” Soon after, a New York Times ad appeared explaining that Nathan Lane was playing Roy Cohn at the Neil Simon Theatre on Broadway. 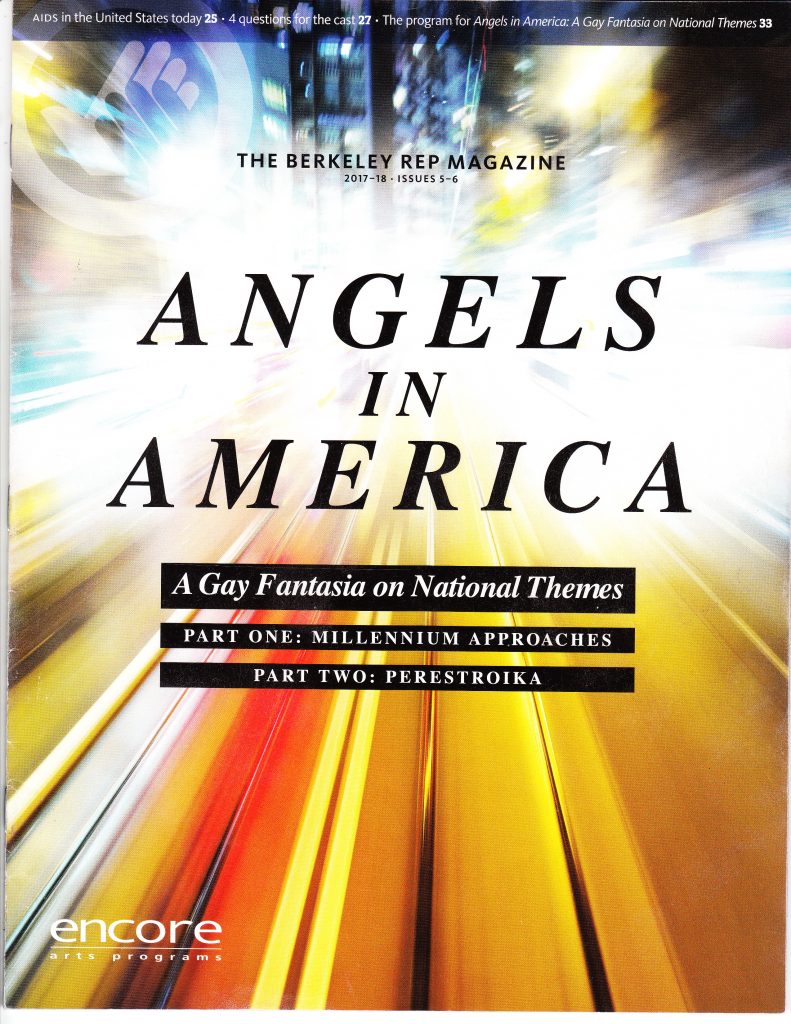 If you think that the timing of current revivals of Tony Kushner’s award winning play “Angels in America: a Gay Fantasia on National Themes” in New York City and at the Berkeley Rep in the San Francisco Bay Area—not to mention San Diego’s Cygnet Theatre in early 2019—is accidental, then you have not been paying attention to Kushner or Washington politics. Last month I attended the Berkeley Rep’s revival of “Angels in America,” and I could not help but conclude how much the play speaks to current American politics and how the latter has altered my perception of Kushner’s momentous play.

Roy Cohn, one of the two actual historical figures portrayed in Kushner’s gripping two-play chronicle of America’s awakening to the AIDS crisis in 1985, was an influential New York attorney who practiced an unmatched brand of amoral, vicious legal strategy that never settled or surrendered, countersued at every juncture, asserted victory at any apparent defeat, and never admitted fault for anything.

Cohn first gained notoriety as a player in the Julius and Ethel Rosenberg spy trials of the early 1950s. If we believe Cohn’s own account of what happened behind the scenes, he was responsible for ensuring Ethel’s death sentence when the husband and wife duo was found guilty of espionage for the Soviet Union. And Ethel Rosenberg is the other historical personage in Kushner’s “Angels.”

As the 1950s Red scare grew, Cohn became Sen. Joseph McCarthy’s right-hand man in his smear campaign to purge actual or supposed Communists and homosexuals from government and the military. That Cohn was an active but closeted gay man did not interfere with his enabling of McCarthy and his witch-hunt. McCarthy was dethroned when his proceedings were televised and people saw what a grotesque, sinister figure he was, and, although he returned to Wisconsin where he still had some admirers, he soon drank himself to death.

Cohn, however, simply walked away from the McCarthy debacle and constructed a lucrative legal career in New York City representing clients whose integrity ran the gamut from mafia dons to Cardinal Francis Spellman, head of New York’s Roman Catholic Diocese, although your view of Cardinal Spellman will determine how wide that gamut really was. Cohn offered his legal assistance to Ronald Reagan’s 1980 election campaign and later in that decade took under his wing Donald Trump as he expanded by fair means and foul his real estate holdings in Manhattan.

Now that Cohn’s protégé is ensconced in the White House, my perception of the interior balance of Kushner’s play has shifted significantly. When “Angels in America” opened in 1992, its central character seemed to be Prior Walter, the bright young man who slowly and inexorably succumbs to AIDS over the course of the two plays. And when I saw “Angels” in its early years, I found the Roy Cohn character of secondary interest, an ironic but colorful stand-in for the successful, closeted gay men who suffered from AIDS behind closed doors and a firewall of privileged denial.

With the discovery of antiretroviral therapy in 1995, which allowed people to live successfully with AIDS, and PrEP in 2012, an agent that lowers the risk of contracting HIV, an AIDS diagnosis ceased to be a death warrant, and the fear of contracting the disease has been significantly lowered. Today, Prior Walter remains a tragic character, but he belongs to a historical epoch that has closed. Only in our memories are we able to conjure friends and colleagues suffering and wasting with Kaposi sarcoma.

But Roy Cohn, although he too dies in “Angels”—as he most surely did in 1986, claiming to be afflicted from liver cancer rather than the AIDS that ended his life—has unexpectedly resurrected in the person of President Trump. This President’s venomous xenophobia, his blaming everyone else for his failures and mistakes, his childish name-calling and narcissistic self-praise all come right out of the Roy Cohn playbook. So today, Kushner’s depiction of Cohn in “Angels” strikes audiences as more insidious and deadly, because daily we see how Trump’s Cohn-tutored tactics have rent the national social fabric and have made the U.S. a pariah everywhere save in the heavily guarded palaces of notorious dictators across the globe.

The Berkeley Rep’s casting of Kushner’s Roy Cohn perfectly mirrors this startling shift of emphasis. Stephen Spinella not only played Prior Walter on Broadway for five years, earning two Tony Awards for his performances: Kushner actually wrote this role for Spinella to play. So what could be more apt than Spinella’s return to the Berkeley Rep’s “Angels” in 2018 as Roy Cohn, although when Kushner told him that the director Tony Taccone wanted him to play Cohn, Spinella rejected the idea completely. Taccone’s connection to “Angels in America” could not be stronger. In 1989 as the director of San Francisco’s Eureka Theatre Company, he commissioned Kushner to write “Angels,” and in 1991 his company premiered the first play “The Millenium Approaches.” The following year, Los Angeles’ Mark Taper Forum premiered the completed “Angels” with its second part “Perestroika.”

Fortunately, Spinella gave in to Kushner’s entreaties, and he gives a stunning and appropriately frightening account of Roy Cohn in the Berkeley Rep’s “Angels in America” production. His Cohn is iron-willed and diabolical, yet fawning and creepily solicitous of his fictional protégé in the play, the young gay Mormon lawyer Joseph Pitt. Spinella’s encouragement of Pitt, played in Berkeley by Danny Binstock, reminded me of President Trump’s twisted contortions to flatter the North Korean dictator Kim Jong-un after their meeting in Singapore.

Kushner’s spotlight on the influence of religion in culture and politics may have seemed exaggerated for the increasingly secular 1980s. He has Ethel Rosenberg help Roy Cohn recite the “Kaddish,” a traditional Jewish prayer associated with mourning, as Cohn approaches death, and the Mormon faith of Joe Pitt’s family—his mother Hannah and his wife Harper—sustains these characters as they cope with Joe’s coming out and the consequent fracture of family cohesion.

But even as the “nones”—those who express no religious affiliation in surveys—increase in 21st-century America, religion has increased its visibility on the current national scene. With white Evangelicals overwhelmingly and vocally supporting President Trump while progressive Christians decry him with prophetic zeal, these Christian factions have managed to hold unusual attention in contemporary media. Members of the Trump Administration have attempted to justify their most outlandish policies by quoting the Bible, and clergy from sometimes opposing viewpoints have roundly denounced their superficial proof-texting.

And, of course, there are Kushner’s angelic appearances in both plays. In various Jewish traditions, angels are intermediary beings between God and humans, messengers of the Divine who alternately confront or comfort mortals. Like biblical angels, Kushner’s angels use exalted, sometimes cryptic language to address mere mortals, but their presence signifies that mortals are not alone in their struggles.

It is a tribute to Kushner’s writing that “Angels in America” does not come across as some hallowed period piece, but an open-ended work that continues to confront audiences with challenges both personal and political. The highly successful New York and Berkeley productions of Kushner’s “Angels in America” will end later this month. I am eager to experience Cygnet’s production of “Angels” next spring, expecting new applications and implications from Kushner’s richly complex magnum opus.