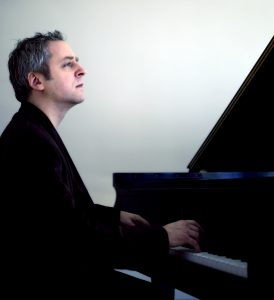 From Denk’s opening flash of bright, crystalline arpeggios up and down the compass of the piano, we were alerted that his account of Beethoven’s monumental work would be anything but ordinary. In the brash, assertive moments, Denk’s explosive energy combined with his impeccable articulation unleashed a heady exuberance from the composer’s familiar fanfares, ably assisted by guest conductor Cristian Măcelaru, who demanded equal precision and verve from the orchestra.

But in the composer’s introspective sections, especially the middle Adagio movement, Denk conjured a dreamy melodic line tempered with elegant rubato and heavenly pianissimos that easily transported the Jacobs Music Center’s ample audience. Throughout the concerto, he balanced a palpable sense of ecstasy with a faithful unfolding of score, using subtle dynamic gradations to elucidate its classical proportions.

After the pomp and triumph of the Beethoven, Denk offered a single encore, a sublime J. S. Bach Allemande.

The young Romanian conductor Cristian Măcelaru, Conductor-in-Residence of the Philadelphia Orchestra, introduced himself handsomely leading Dmitri Shostakovich’s First Symphony, Op. 10, on the program’s opening half. In his teen years as a conservatory student, Shostakovich supported himself by accompanying silent films, and in his First Symphony, which he composed as a graduation requirement, it is easy to hear the kaleidoscopic changes of mood and tempo that any action-packed silent movie might require. Although the work’s structure is clearly symphonic in a rather traditional sense, the abundance of solos liberally distributed throughout the orchestra make it sound like a rough prototype for Bartók’s later Concerto for Orchestra.

Perhaps because Măcelaru was trained as a violinist as well as a conductor, he spoke a language the strings understood. For the Shostakovich they produced an aptly dark sonority that still retained a level of warmth, and the unity within each section was striking. He also presided over an appealing array of subtle string colors in Franz Liszt’s “The Black Gondola,” a stark piano solo that American composer John Adams arranged for orchestra.

Like the two female conductors Mirga Gražinyté-Tyla and Karina Canellakis who have led the orchestra in the last two months, Măcelaru certainly looks like candidate material as Music Director Jahja Ling’s successor. In my opinion, speculation about a new music director for the orchestra is far more engaging than the local media’s incessant speculation about the fate of the Chargers football team.

[themify_box style=”shadow” ]This performance by the San Diego Symphony was given and reviewed on January 16, 2016, and was repeated on January 17, 2016,  in the Jacobs Music Center’s Copley Symphony Hall. The next program of the Upright and Grand Festival will be given on Tuesday, January 19, 2016, in this venue: pianist Jeremy Denk will play J. S. Bach’s “Goldberg Variations.”[/themify_box]