Zoom theatre is with us for the foreseeable future, and companies throughout the country are working hard to learn the ins and outs of this platform in hopes of creating high quality products that will drive much needed revenue. Three such products were on display recently, and each presented both opportunities and challenges. I’ll comment on each in the order seen. 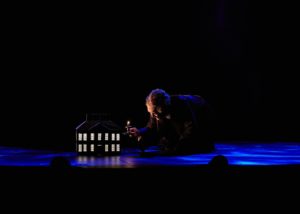 La Jolla Playhouse has the splashiest production in Jefferson Mays’ solo performance of Dickens’ holiday staple, A Christmas Carol. Mr. Mays, who previously appeared here in I Am My Own Wife, another solo show, produced this version at the United Palace in New York, with Michael Arden directing. Mr. Mays collaborated with Mr. Arden and Susan Lyons on the adaptation. The Playhouse is one of the lead partner organizations, and a group of theatre companies from around the US is presenting the stream.

It’s the class act of the three I saw, and Mr. Mays’ work as an actor is admirable.  It’s also not really Zoom theatre, which has its advantages and disadvantages. The primary advantage is that the recording looks and feels like a filmed version of a play. The primary disadvantage is that the filmed version is distancing, pushing away viewers, rather than bringing them in as part of an imagined audience. I am not one in the thrall of A Christmas Carol as a holiday offering, probably because I saw it way too many times growing up. I am sorry to report that I became bored about halfway through. Your mileage may certainly vary, though.

San Diego State, through a collaboration between theatre professors Stephen Brotebeck and Robert Meffe, has been producing a series of “concert” versions of musicals for several years. It’s a venture that provides an engaging experience for lots of theatre and music students, involving not only students enrolled in Mr. Meffe’s Master of Fine Arts program in musical theatre, but also students performing with the SDSU orchestra and the chamber chorale, along with theatre undergraduates.

This fall, the venture was one of the few where students spent time on campus, rather than in the virtual realm. And yet, the finished product was virtual, reflecting a lot of work—not all of it done on campus– to record and assemble individual contributions.

The cast of Chess
Photo by Robert Meffe

They were helped by the choice of material, the rock opera, Chess. Written by Tim Rice, Benny Andersson, and Björn Ulvaeus, Chess was a 1980s work that did better as a “concept album” than it did as a staged production. And, in a way, it turned out to be an ideal choice for a format that had to be socially distanced. A story about US and Soviet competition at the world chess championships, the chess match serves as a metaphor for Cold War politics of the time. And, the score poses quasi-operatic singing challenges for the leads, all of them MFA students with a list of professional credits.

Under Mr. Meffe’s musical direction, the leads uniformly demonstrated their talents. The two chess players were Anatoly Sergievsky (Kyle Montgomery) and Frederick Trumper (Julio Catano), along with their “seconds,” who are, essentially, their managers: Florence Vassy (Victoria Fowler) for the US and Alexander Molokov (Christopher Shin) for the Soviets. Casey Craig portrayed Walter de Courcey, the producer of the championships. The two standouts, to my mind, were Ms. Fowler, who carried much of the script’s conflict, and Mr. Shin, whose performance featured stylistic touches that set it apart.

While there were some minor flaws in the assembly, the production came off gloriously, with captivating solo work and lush playing by the orchestra. The isolation that was a byproduct of the Cold War and reflected in Mr. Brotebeck’s staging made a strong case for contemporary attention to Chess as a lasting contribution to the musical theatre repertoire. 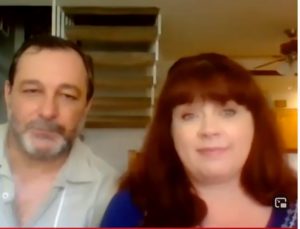 Manny and Melissa Fernandes, on Zoom
Photo from a Cygnet Theatre Interview

Melissa Fernandes is in some ways the antithesis of Perry Como, but her pandemic version of Cygnet’s Musical Mondays holiday show was as soothing as a Perry Como Christmas Special. The 90-minute performance featured live Zoom interviews with the performers, all of whom appeared in previous Cygnet productions, as well as recorded versions of the songs they chose.

The songs ran the gambit of music of the season, along with some pieces that have become associated with the holidays. Under Patrick Marion’s musical direction, Anise Ritchie offered elegant versions of “The Christmas Song (Chestnuts roasting on an open fire)” and Donny Hathaway’s “This Christmas.” David Kirk Grant performed the first version of “You Make It Feel Like Christmas” (there were two, an oddity that nevertheless deserved a reprise). Raquel Williams sang the pop hit, “Underneath the Tree” and the Amy Grant story-song, “Breath of Heaven.” Kürt Norby went country with Willie Nelson’s “Pretty Paper” and “Santa Claus is Coming to Town.” Megan Carmitchel provided the most elaborate production with a tribute to her mother in “Love Is Christmas” and in singing three different parts of the Pentatonix hit, “White Winter Hymnal,” along with Donny Gersonde’s tapping feet. Ms. Fernandes opened the program with “We Need a Little Christmas,” featuring her family, including husband, Manny, who also did the “backstage” work to make the show a true Zoom production. She also soloed on “Grown Up Christmas List” and led the cast in “Put a Little Love in Your Heart” for the finale.

Not only was the Cygnet offering the only one with live components, it was also the one most directly used as a fundraiser, opening with a pitch from Development Director Marinda Peugh and also including a drawing for dinner and a bottle of wine at a high-end restaurant. Both the Playhouse and SDSU sold tickets but provided the opportunity to contribute as part of the ticket buy (Cygnet did that as well, actually, but also added the live giving opportunities).

December wouldn’t be the holiday month without concerts, and these three productions did their best to put audiences into the holiday spirit.

A Christmas Carol is available for streaming through January 3 at https://lajollaplayhouse.org/show/a-christmas-carol/. Chess performed December 3 – 6, at times it would have performed at SDSU were it live. Cygnet’s Musical Monday performed on December 7. Full disclosure: Bill Eadie is a retired SDSU professor.