Josh Harmon’s play, Admissions, was premiered in 2018, and in some ways it feels dated. In other ways, it seems to be quite current. OnStage Playhouse takes advantage of a solid cast to explore how race and racism has crept into daily life during a period of sharply contrasting ideological differences. 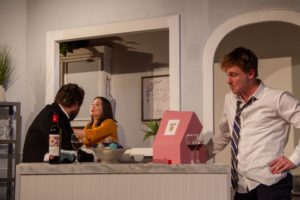 Charlie (Devin Wade) is applying for college, and he is set in his own mind on going to Yale. There is certainly a chance that he might be accepted, as he’s attended a high quality New England private boarding school where his mother, Sherri (Wendy Waddell) works on diversifying the student body. She’s been mildly successful at this task, but she’s aware that it’s a slow process, something that isn’t accomplished in a single year or two. At the same time, she’s both realistic about Charlie’s chances, concerned about his single-mindedness about attending Yale, and enough of a “helicopter parent” to want to intervene if there’s a chance of success.

At work, Sherri is frustrated because her colleague, Roberta (Anna Sandor) doesn’t “get” how diversity is important. Roberta’s current project is developing a recruitment brochure for the school, and she has trouble understanding how to use visual elements to market the school to students of color. At home, husband Bill (Tom Stewart) is leaving Charlie’s application process to Sherri, and paying more attention to his job as the school’s Headmaster.

Sherri also has a best friend, Ginnie (Holly Stevenson), who is married to an African American man. Their son, Perry, is Charlie’s best friend and has also applied to Yale. 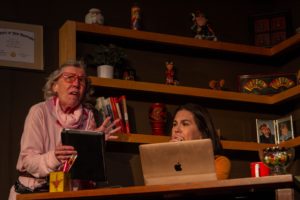 When Perry is admitted to Yale and Charlie is “deferred,” a whole bunch of resentments and soul-searching surface.

Satire is tough to pull off, especially when it comes to the effects of whiteness, but OnStage Executive Director James P. Darvas has coached his cast to play the emotions and leave the laughs to audience identification with the characters (or lack of same). He effectively uses Felipe Ramirez’s set design and Kevin “Blax” Burroughs’ lighting design to create several locales in a single space, while Pam Stompoly-Ericcson’s costume designs look like clothes these characters would wear.

Ms. Waddell’s performance as Sherri provides an emotional center to the piece, allowing her family, friends, and colleagues to play out their frustrations. Mr. Wade’s Charlie ricochets, emotionally, in adolescent fashion. Mr. Stewart’s Bill is supportive but also trying to stay out of trouble. Ms. Stephenson’s Ginnie is an appropriate “best friend” and sounding board. Ms. Sandor’s clueless Roberta is, perhaps, a bit too clueless and thickheaded, but that’s why satire isn’t easy.

I would like to be smug and say that much of these diversity issues have been worked out in 2022, and while that may be true in some places, it’s still being played out in others. Admissions’ seventy-five-minute run time may get you thinking. It will certainly get you laughing.

Performs Thursday, Friday, and Saturday at 8pm, Sunday at 2pm, through February 27. Street parking is available within a short walk from the theatre. Design credits not mentioned in the review are Estefania Recalde (Production Stage Manager and Sound Designer) and Antonio Ortega (Set Construction).