Dripping with sexism and class snobbery, “My Fair Lady” is one of those musicals so grating to 21st century sensibilities, one might feel it should remain on the shelf. Ah, but the Lerner-Loewe tunes are magnificent. And any tale that’s persisted from Greek mythology to Shaw’s “Pygmalion” to “Pretty Woman” clearly touches deep psychological chords. 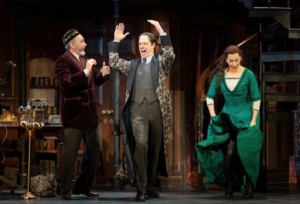 Enter Bartlett Sher, the director who breathed fresh life into “South Pacific” and “The King and I.” Sher’s “My Fair Lady” shifts the story’s focus from its Pygmalion, the arrogant Henry Higgins, to Eliza Doolittle as a smart, scrappy woman who insists on dictating the terms of her own life. The show debuted on Broadway in 2018 and plays at the Civic Theatre through December 5, presented by Broadway San Diego.

Although Sher significantly altered the story’s ending, he made only minor tweaks in the book by Alan Jay Lerner. His re-imagined “My Fair Lady” involves making Higgins younger to lessen the imbalance of power with Eliza based on age and using bits of stagecraft like opening with Eliza, alone, walking down a London street—placing us in her perspective at the start.

Of course, there’s Eliza herself. Shereen Ahmed is a spirited Eliza, self-possessed with both men who try to bully her—Higgins and her father. Her supple voice yearns in “Wouldn’t it Be Loverly?” and soars on “I Could Have Danced All Night.” In an emotional high point, she rivets attention by standing utterly still, clearly wounded to the core, during the celebratory “You Did It,” where Higgins takes all the credit for her triumph at the ball. 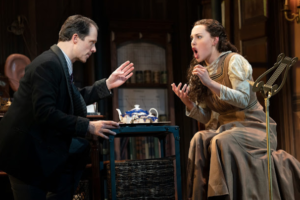 Laird Mackintosh as Higgins doesn’t miss a syllable of the rapid-fire patter in “I’m an Ordinary Man” (“Let a woman in your life”). Exultant in victory, he joins Eliza and Colonel Pickering (Kevin Pariseau) in a delicious trio with hints of flamenco in “The Rain in Spain.” However, his Higgins is so convincingly despicable, I cringed whenever he took center-stage. I could have done with more charm to balance the churlishness; maybe it’s there but gets lost in the cavernous Civic Theatre.

Perhaps in Sher’s production—or in a MeToo world—the gender battle lines are so sharply drawn that the men can’t help coming across as clueless at best, if not utter bounders. Adam Grupper, a rollicking Alfred P. Doolittle, delivers some of the show’s crudest lines—like offering to sell Eliza to Higgins for five pounds—and most memorable songs. I do wish he’d displayed more tap-dancing skill in “I’m Getting Married in the Morning.”

Sam Simahk plays Eliza’s suitor, Freddy, as a sweet but spineless upper-class twit. Colonel Pickering, given a kind, steady presence by Pariseau, is Eliza’s one male defender … but her most stalwart allies are Mrs. Pearce, played with brisk authority by Gayton Scott, and Mrs. Higgins, Henry’s mum, to whom Leslie Alexander brings warmth and humor. 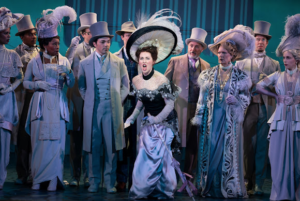 Visually, the production is ravishing. In the delectable “Ascot Gavotte,” misty gray lighting by Donald Holder echoes costume designer Catherine Zuber’s dove-gray ensembles. Zuber’s pièce-de-résistance is a vivid lipstick-red coat with puffy sleeves that Eliza puts over her sparkly gown as she leaves for the ball.

Michael Yeargan’s exquisitely detailed sets include an elaborate 360-degree home for Higgins that sometimes turns mid-song, with characters walking from one room to another.

Choreographer Christopher Gattelli gives the upper-crust, gray-clad Ascot crowd an oh-so-proper gavotte … and makes it clear that the poor have more fun. The romp in “I’m Getting Married in the Morning” includes four women dressed as Folies Bergère dancers, joined by four identically costumed men.

This show seems just the thing for audiences who’ve been starved for big, spectacular productions. What it didn’t deliver, for this viewer, was theatrical magic. I didn’t feel deeply engaged or excited. And while Sher’s update certainly offers a new perspective, I didn’t have a sense of seeing “My Fair Lady”—and ultimately the world—in a way that felt refreshingly new.

However, I’m in a distinct minority. This “My Fair Lady” has wowed audiences on Broadway and on tour and is sure to do so here.