The PKF-Prague Philharmonia brought its quite traditional, all-Czech program to the Jacobs Music Center Wednesday (January 25), thrilling the hall’s substantial audience with its muscular, propulsive style and mellow Central European sound. Although the orchestra is a newcomer—it was founded in 1994—its musical DNA goes back to the 19th century, when Prague was a remote but lively cultural citadel in the Austro-Hungarian Empire. 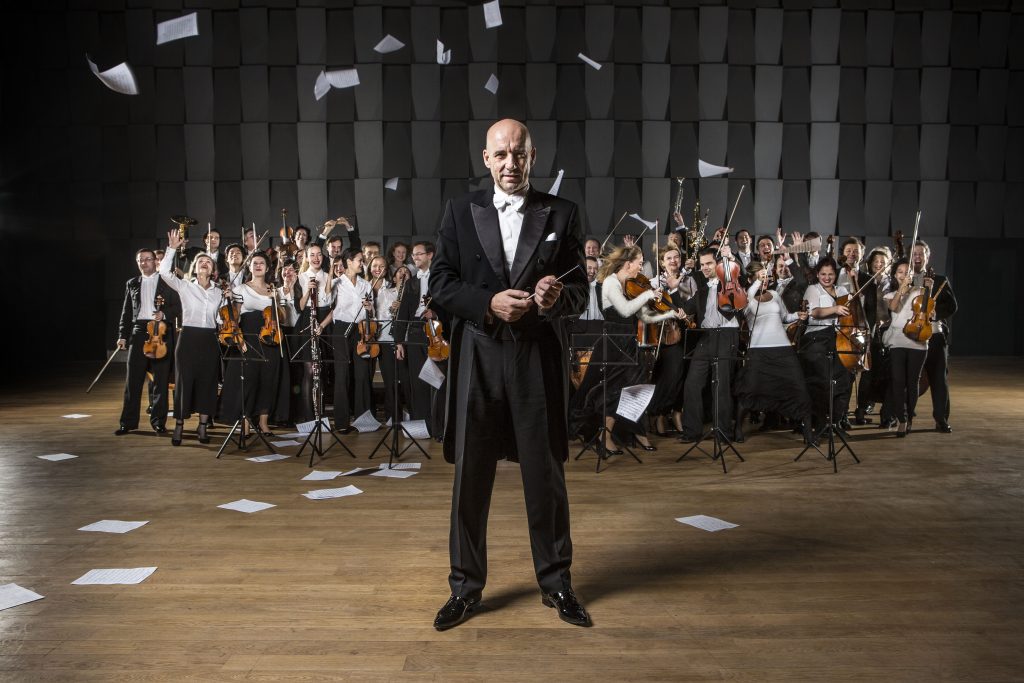 It only took a few measures of the Prague Philharmonia violins playing alone in Bedřich Smetana’s beloved “Moldau” to confirm that sweet, satiny sonority that is the birthright of string players from that part of Europe. Their unique timbre coupled with (no doubt) prodigious amounts of rehearsing produced a solid ensemble that is untouchable. And the cello section, in their opening solos in the outer movements of Antonín Dvořák’s Symphony No. 8 in G Major, outdid the violins in mesmerizing pulchritude.

A hulking dervish on the podium, the exuberant French maestro Emmanuel Villaume led this spunky Czech orchestra. With his long arms constantly flailing in exaggerated but unmistakable gestures, were he to be spied at a distance by Don Quixote, the fabled knight would surely mount an attack without hesitation. But his energetic style evoked a consistently vibrant response from his 64 musicians, who produced as virile and vital a sound as many larger orchestras.

If Dvorak’s Symphony No. 8 lacks the structural rigor of Beethoven’s symphonic style, it easily compensates with a wealth of melodic invention that these visiting musicians delivered with natural, unaffected grace. While all of the Symphony’s musical ideas are Dvořák’s, many suggest the cadence and lilt of Czech folk song and dances, clearly this orchestra’s resplendent patrimony.

Kudos to the pellucid trumpets who soared in the second movement and introduced the last movement with such panache. Even more impressive, the low brass—trombones and tuba—roared through the vivacious sections of the Symphony with such fire and buzz, at times I thought the sound was coming from traffic outside the concert hall.

Guest soloist Gautier Capuçon took on the heroic proportions of Dvořák’s Cello Concerto with unflinching confidence and skill. The urgent sweep of his melodic line carried on his beefy, bright tone colored with an unusually wide vibrato complemented the orchestra’s majestic account of this  magnificent late Dvořák work. In the introduction to the first movement, Principal Horn Jan Musil’s suave, radiant solo subtly challenged the cellist to match  his allure. Mellifluous, sparkling duets between the cello soloist and Principal Flute Jiři Ševčik graced the first and second movements—the composer was obviously enthralled with this sonic combination.

Although Dvořák included no cadenzas in this masterful concerto, he did require consummate mastery from the soloist, which Capuçon obliged throughout. I would love to hear his take on Tchaikovsky’s “Variations on a Rococo Theme.”

[themify_box style=”shadow” ]This concert was performed in the Jacobs Music Center’s Copley Symphony Hall on Wednesday, January 25, 2017, under the auspices of the La Jolla Music Society. The Society’s next orchestra presentation will be the Bamberg Symphony under Christoph Eschenbach on Saturday, February 18, 2017, in the same venue.[/themify_box]