Can we hear paintings? Can we see musical sounds? UC San Diego composer Lei Liang and his high-tech collaborators have fused these two unusual propositions into a provocative film “Deriving Worlds,” which will be premiered on May 7, 2016, at 5:00 p.m. at UC San Diego’s Filmatic Festival. 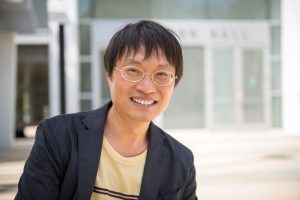 Liang’s imagination was sparked by two landscape paintings he admired by the 20th-century Chinese artist Huang Binhong (1865-1955). After a complex process of scanning the paintings and then greatly enlarging them for high-resolution projection, Liang created a deft, airy electro-acoustic score to illumiate the myriad details of the painting as revealed by the enlarged projections.

In order for the listener to have the simultaneous experience of seeing the paintings on a large screen and hearing Liang’s beautiful pointillist score, the team made the 30-minute film “Deriving Worlds.”

“This creates an immersive experience that allows the observer to travel inside a painting and be surrounded by the music,” explained Liang at a preview screening held at UC San Diego’s Atkinson Hall on April 27. The Chinese-born, American composer also noted that his intention for such a multi-disciplinary project was to integrate science, technology, cultural heritage preservation, art and music.

Born in Tianjin, China, to musicologist parents, Liang studied in the United States, taking degrees at the New England Conservatory of Music and Harvard. Winner of the 2011 Rome Prize and a Guggenheim Fellowship, he was named as a finalist for the 2015 Pulitzer Prize in Music for his saxophone concerto “Xiaoxiang.” He joined the music faculty of UC San Diego in 2007 and has for the last three years served as a fellow at the Qualcomm Institute on the university campus. [themify_box style=”shadow” ]ArtPower’s Filmatic Festival takes place on Saturday, May 7, 2016, 10:00 a.m. to 10:00 p.m. at the Qualcomm Institute at the California Institute for Telecommunications and Technology on the UC San Diego campus.[/themify_box]