Surrounded by civic leaders and members of the San Diego Symphony board and orchestra, Symphony C.E.O. Martha Gilmer presented the Music Director Designate Rafael Payare to an invited audience of press, symphony patrons, and representatives of other San Diego arts organizations. At Monday’s carefully scripted hour-long welcome held on the stage of Copley Symphony Hall, the 38-year-old Venezuelan maestro impressed his listeners with his enthusiasm and charmed them his clever analogies of food preparation and its resultant pleasures to the work of a symphony orchestra. 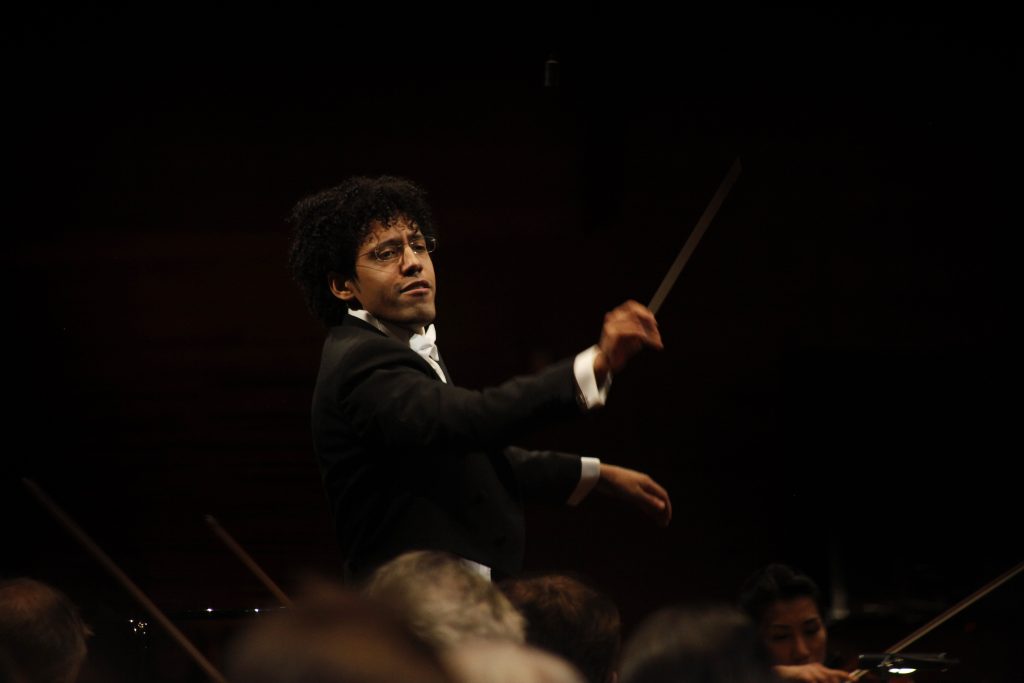 “When you enjoy a delicious meal or hear beautiful music, you forget about the work of cutting up the ingredients and cleaning the utensils afterwards,” he quipped.

On February 13, 2018, only a month after Payare had conducted his mid-January weekend of concerts with the San Diego Symphony—Payare was a featured guest artist on the Symphony’s successful It’s About Time festival—Gilmer announced that the Symphony’s search committee had selected him to become the next Music Director, a position left open by the retirement of Jahja Ling in May 2017.

In her remarks on Monday, Gilmer recounted that members of the Symphony search committee followed Payare to Chicago after his favorable reception with the San Diego Symphony musicians and public to observe him lead the noted Chicago Symphony. His success in the Windy City convinced the search committee that they had found their new Music Director, and Payare accepted their offer. He remains Music Director Designate until July 2019, at which time he will assume the position of Music Director.

Although Payare did not lay out his specific plans for the orchestra, he did indicate his belief in the value of presenting cycles of concert works by major composers such as Dmitri Shostakovich, Richard Strauss, Beethoven and Mozart in order to gain a deeper appreciation of their musical depth. He also expressed his desire to engage in bi-national music making with orchestras in Baja California.

San Diego Symphony Board Chairman Warren O. Kessler stressed that the three orchestra members on the nine-member Search Committee “were the driving force of that committee in selecting the new director.” Rafael Castellanos, Chairman of the Board of San Diego Port Commissioners, expressed the Port Commission’s avid support for the San Diego Symphony’s planned bayside performance facility at the Embarcadero Marina Park South and looked forward to maestro Payere’s leadership in shaping that programming.

Representing Mayor Kevin Faulkner, who did not attend the event, District Three Council Member Chris Ward noted the City of San Diego’s budget had increased its financial support for the arts in the current fiscal year, a sign of the importance of the performing arts to the quality of city life.

Payare will be heard on two slightly different concerts at the Jacobs Music Center January 10 to 13, 2019. Built around Richard Strauss’ tone poem “Don Juan,” the first program will also offer Modest Mussorgsky’s “Pictures at an Exhibition” in the Ravel transcription, and the second will contrast the Strauss with Shostakovich’s Tenth Symphony and the Benjamin Britten Cello Concerto featuring Alisa Weilerstein.